I’m sure we’ve all wondered, how does Taylor Swift stay so
fit while fending off the screaming fans and skinny jeans wearing guys?

I’m just kidding. I have no idea and don’t care. After the constructive feedback from the last post, I promised
my fans I would return to my bubble and not write anymore Taylor Swift posts, so this blog is not about that.

Instead, let’s talk about why I chose Krav Maga as the preferred fighting style in the SPECTRE Series.

“I know,” Baxter said
as he calmed down.  “But I was kind of
hoping Cal would do some of that Kung Fu stuff on him just for the hell of it.”

“Krav Maga,” Decker
corrected.  She frowned at Baxter’s weak
attempt at a joke.  “And we certainly
don’t need any of that today.”

It’s a conversation I’ve had many times before when
discussing my training in Krav Maga. When talking about the Israeli
self-defense system, the responses have ranged from “Say what?” to “So does
that mean you can kill me with a thought?”
In my SPECTRE Series thrillers, main character Cal “Spectre”
Martin is a black belt in Krav Maga, so today I thought I’d go into a little
more detail about it and explain what it is and what it isn’t.

What is Krav Maga? 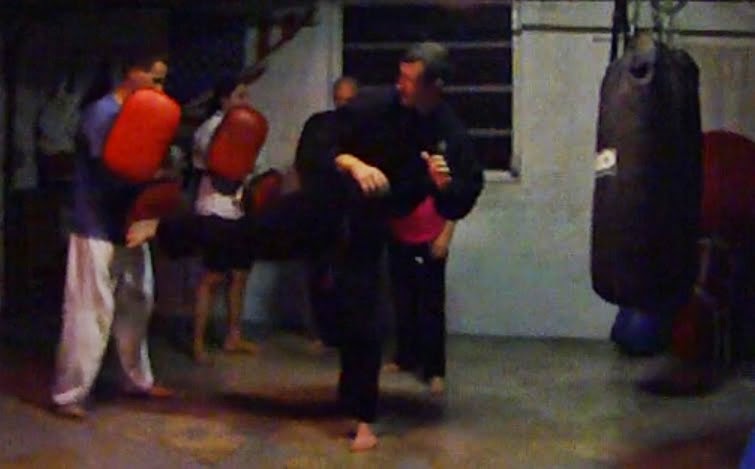 It seemed brilliant in its simplicity. The best defense is a
good offense. My basic police academy used to play on those words saying,
“nothing good ever happens on defense.” I learned that moving forward,
attacking, and moving on were keys to survival. It was a no frills, extremely
effective system that had me hooked from day one.
After surviving the first day, I made it part of my life. I
wanted to be in better shape. I wanted to add the tools of Krav Maga to myself
defense arsenal. I wanted to embrace it.
I started out going to class just on Sunday mornings, but
the more I learned the more I wanted to learn. The more I faced off against
people twice my size and felt defeated, the more I wanted to master it. And so
I began adding days, going from once a week to three days per week.
And then one day after class, Sensei Erez pulled me aside.
He offered me an opportunity – to become a certified instructor in Survival Krav Maga. I had helped him give
seminars to local security firms before, but he wanted me to be able to teach
on my own. It was humbling and an awesome opportunity. I accepted.
I had some leave built up one month, and took the month off
to train. I trained nearly every day, and some days twice per day. At the time,
I was disappointed when he would have me sit down and take notes instead of
physical training, but later I realized that the mental knowledge and
preparation were perhaps more important than the physical side of things.
Some of these skills would translate directly into Spectre’s
character. Specifically, the concepts of avoidance, negotiation, and then
killing. My second novel is completely based on these tenants. It’s spelled out
in the first chapter, but the theme of the novel is Spectre’s application of
them.
I graduated with my instructor certificate in late 2011 and
earned my Brown Belt shortly before leaving Miami in 2012. It was bittersweet
receiving that belt, knowing that my time training regularly with Sensei Erez
had come to an end. I was moving on to the Navy Reserve and to Louisiana. I
considered him both a friend and mentor that I was sad to leave.
I never quite found anything close to that experience when I
moved to Louisiana. The problem with Krav Maga is that it has become very
commercialized. There are many “boutique” UFC gyms that boast Krav Maga
instruction, when in reality, they’re nothing more than MMA gyms with one or
two instructors who took a one or two day course and received a certificate,
having never actually even met an Israeli.
My training now is mostly in my own garage. I often invite
friends to train with me, and I teach based on the concepts and techniques of
Sensei Erez. It keeps me mostly proficient and in shape, but I don’t think it
will ever quite be the same. I have also had the opportunity to teach seminars for
local law enforcement, which is challenging and rewarding all on its own.
For now, my training and experience live on through Cal
Martin as he fights, “attacks his attackers” and pushes forward through the SPECTRE
Series books.

Krav Maga is not a sport. In UFC and MMA, it usually fails.
The reason for that is that in Krav Maga, there is only one rule – survival.
Specific techniques taught in Krav Maga are banned in sport
fighting because they are designed to cause serious or permanent injury. Krav
Maga is a weapon to be used in self defense only. It requires just as much
discipline as owning a taser, baton, OC spray or even a handgun.
This is the reason behind the Avoid, Negotiate, Kill
concept. If one can avoid a fight, then that is always the preferred tactic.
There is no room for ego in Krav Maga. Living to fight another day without
having to engage the threat is by far the most effective method.
If that doesn’t work, negotiation is the second best option.
Again, this technique stresses the need for a person to check their ego at the
door. Sometimes people can talk their way out of a situation. If that is possible,
then it allows the defender to fight another day.
Finally, if all else fails, Krav Maga teaches to Kill.  Kill
their will to fight, kill their ability to fight, or kill them. This is where
the idea of “attacking your attacker” comes into play. Once the decision has
been made to kill, there is no hesitation. The idea now is to quickly and
efficiently stand down the threat through violence and swiftness of action. It
is unlike boxing or MMA where we can accept standing up and going blow for blow
with the adversary. The idea is to use whatever means necessary to end the
fight and move forward.
I hope you’ve enjoyed this blog post. Hopefully this clears
the air and gives a bit more insight into the Cal “Spectre” Martin character.
And if you have to ask, yes, I can kill you with a thought.
It was an honor training with Sensei Miki Erez who is now
actively involved in helping those in wheelchairs to stay in shape and improve
their lives. His story is amazing, and if you have time, I highly recommend
visiting http://www.wheelchairfitnesssolution.com/
and checking out his revolutionary new wheelchair training system.
Thank you for reading. Stay tuned for the next blog post.
Until next time.